Jori Whitfield-Topp is a solicitor at Franks Ogilvie.

Jori completed his LLB / BA in late 2021 with a double-major in Political Science and International Relations. He was admitted to the profession in early 2022.

He has experience across the public sector, having worked at Te Taura Whiri | Te Reo Maori (Māori Language Commission), the Electricity Authority and NZ Police.

Alongside his interests in public and commercial law, Jori enjoys employment law in his previous work as a legal assistant. He has provided commentary on various topics, including business approaches to COVID-19, Labour Inspectorate Decisions and the Declarations of Inconsistency Bill. 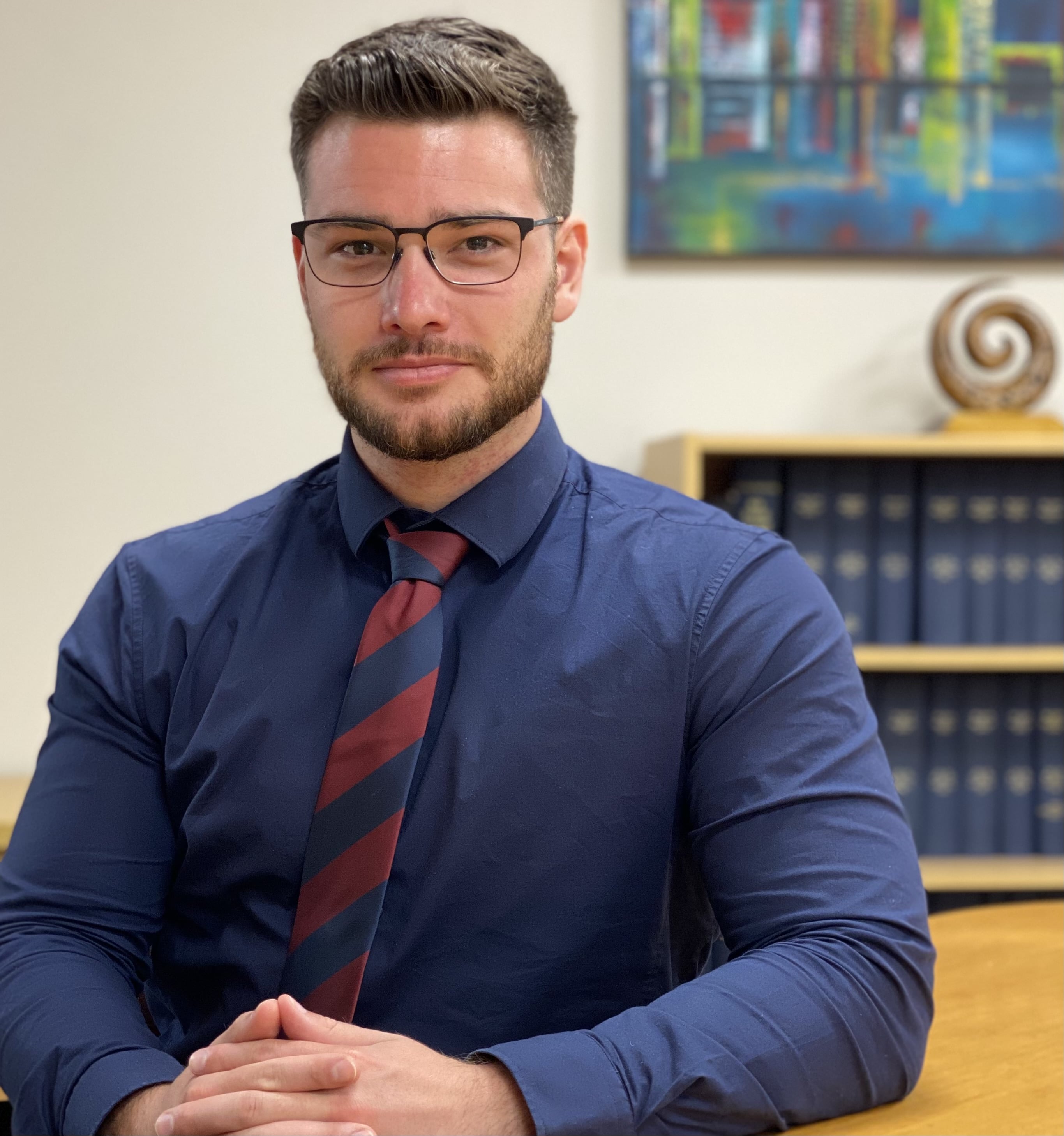 Grounded Kiwis challenged the MIQ system as an unjustified limitation on the right of New Zealanders to enter the country under the New Zealand Bill of Rights Act (NZBORA).

In response to COVID-19, the New Zealand Government established the MIQ system to prevent the spread of the virus. From 10 April2020 to 28 February 2022, all arrivals, including New Zealand citizens, were required to enter MIQ facilities and be tested for the virus.

Under the MIQ system, the primary pathway for New Zealanders to enter the country was through a virtual lobby. This was assisted by an offline emergency system for those with special considerations. Both avenues caused difficulty for New Zealanders attempting to return, who faced delays as MIQ’s limited capacity led to significant backlogs.

In February 2022 the Government brought an end to MIQ requirements for vaccinated New Zealanders returning to the country, and this was later extended to those who were not vaccinated.

Despite the Government’s removal of MIQ requirements, Mallon J deemed that the matter remained one of public importance. The Court affirmed that every New Zealander has a right to enter New Zealand. This right could only be limited through legislation in a manner which was demonstrably justified.

Grounded Kiwis argued the requirement to have a voucher to enter MIQ and to isolate in MIQ for 14 days was an unjustified limitation. His Honour disagreed, and held the requirement was a reasonable and proportionate limit on the right to enter during the period it was in place.

MIQ’s virtual lobby was managed through an online voucher system which did not prioritise citizens over other applicants or consider individual circumstances. Grounded Kiwis provided several examples of how the system had prevented citizens from returning home, leading to significant stress and grief. The Court acknowledged the voucher system operated like a lottery, and was not an appropriate mechanism to give effect to the right of citizens to enter the country. It also failed to consider recipients on the basis of need, or how long a person had been seeking to return.

In addition to the voucher system, MBIE provided an emergency category for New Zealanders who had a significant need to return. Grounded Kiwis submitted MBIE’s high threshold for a person to have “no other option” meant it failed to consider a person’s financial position and their physical or mental health. The Court accepted the threshold was too narrow, and noted only a limited number of places were available for people who met the criteria. The Court also held MBIE had misinterpreted the requirement that emergency applications be made within 14 days of “intended departure” as instead“ intended arrival.”

Mallon J stated that While MIQ was a critical component of the Government’s elimination strategy, it infringed the rights of New Zealanders to return in a manner which could not be demonstrably justified. The Government failed to show that a less rights-impairing MIQ system was not reasonably available and that would have sufficiently achieved the Government’s public health strategy. A system which better prioritised citizens could have been achieved by reallocating more rooms for New Zealanders in a manner which appropriately considered individual circumstances.

Grounded Kiwis also argued some group allocations (such as for sports teams) did not serve a purpose sufficiently important to curtail a citizen’s right to enter. The Court held that while there were instances of process errors, group allocations were prescribed by law and neither arbitrary nor discriminatory.

The Court held the MIQ system, as it operated between September and December 2021, was an unjustified limitation on the right to enter New Zealand under NZBORA. Mallon J held a declaration to this affect was appropriate, though left the parties to agree on the wording of such a declaration.

The New Zealand Motor Caravan Association (“NZMA”) successfully judicially reviewed the introduction of a blanket ban on freedom camping across the Marlborough district by the Marlborough District Council (“MDC”).

In October 2019, the MDC engaged a consultant to undertake a review of freedom camping in the district. Their subsequent report documented the environmental cost and impacts of irresponsible campers, in particular their disposal of human waste and litter. The report also noted social costs, including the blocking of access and general annoyance to members of local communities.

In response to these issues, the MDC commenced the 2020 MDC Responsible Camping Control Bylaw (“2020 bylaw”). The 2020 bylaw introduced a blanket prohibition on freedom camping across the Marlborough district unless specifically permitted on a listed site. This effectively banned freedom camping by default.

NZMCA represents the interests of private motorhome and caravan users. A vast majority of its members own registered vehicles with self-contained waste disposal. NZMCA applied for judicial review, seeking to set aside the 2020 bylaw.

NZMCA pleaded three causes of action. The first was MDC had failed to adequately consult the public on the new provision. The second was MDC made an error of law, as the blanket prohibition was neither the most appropriate nor proportionate measure as required under Freedom Camping Act. By extension, MDC thirdly argued the response was disproportionate and therefore unreasonable.

The blanket prohibition was added to the 2020 bylaw after public consultation was closed, and was a significant change to the statement of proposal originally consulted on. Grice J found that the MDC did not exercise its discretion as to whether it should re-consult on the 2020 Bylaw responsible for the blanket prohibition. This failure to re-consult was an error of law.

The Freedom Camping Act requires that a bylaw made by a local authority must be “the most appropriate and proportionate way of addressing the perceived problem in relation to that area.” The bylaw must also not have the effect of prohibiting freedom camping in all the local authority areas in the district.

Grice J was unsatisfied a blanket prohibition was the most appropriate or proportionate way of addressing the freedom camping issue in the district. It also did not appear the MDC had considered all areas of the district, as required under the Freedom Camping Act. This amounted to an error of law.

The Court concluded in light of these findings the 2020 bylaw was unreasonable, as it was a disproportionate response and could not be justified.

The Bylaws Act 2010 allows the Court to sever or amend the offending part of the bylaw rather than quashing the decision.

After discussion with counsel, Grice J determined the most appropriate and balanced outcome would be to remove the clause responsible for the ban and leave the remainder of the 2020 Bylaw in place. This decision meant freedom camping was again permitted in the Marlborough region. The MDC has since undertaken its own review of the Bylaw, and provided an opportunity for public submissions and consultation.

If you would like to understand more about challenging a local authority decision, please contact Director Brigitte Morten

The High Court overturned the government’s vaccine mandate for the New Zealand Police and Defence Force, finding it was not a justified limitation of rights and therefore unlawful.

Following the enactment of the COVID-19 Public Health Response Act 2020 (“the Act”), the government commenced a number of orders requiring specified workers to be vaccinated.

The COVID-19 Public Health Response (Specified Work Vaccinations) Order 2021 (“the Order”) required Police and Defence Force personnel to be vaccinated. The three Police and Defence Force workers who brought the proceedings faced termination if they were not vaccinated by 1 March 2022, and applied for judicial review of the Order. An additional 37 workers also facing termination gave evidence.

The applicants challenged the Order on four grounds:

·        the order was inconsistent with the purposes of the Act

·        the Order disproportionately affected Māori and was inconsistent with Treaty principles

The Court rejected the second and third grounds. It did not accept the Order was inconsistent with other legislation, as the empowering Act ensured Orders made under it remained effective, regardless of inconsistency with other legislation. The Court also dismissed the argument that the order disproportionately affected Māori, citing Crown engagement with Māori throughout the health response.

Was the Order inconsistent with the purposes of the Act?

The Court found the Order, directed to ensure continuity of Police and Defence Force services, was consistent with the Act’s purpose of supporting a public health response to Covid-19. Instead, the Court took issue with the purpose clause within the Order itself. The Order originally stated its purpose was to prevent and limit the risk of the outbreak or spread of Covid 19. After the court claim was filed, it was discovered that this purpose had been incorrectly formulated as the result of a drafting error. The purpose clause was replaced, and included the phrase “to ensure continuity of services that are essential for public safety, national defence, or crisis response”.

Justice Cooke noted this had implications for procedural fairness and was a reviewable error. His honour did not address the point further however, having reached the view that the order was unlawful on other grounds.

Was the Order unjustified?

While NZBORA allows for rights to be limited, it must only be done so where demonstrably justified. In this case, the Court held the vaccine mandate limited the rights to refuse medical treatment and manifestation of religious belief. These limitations needed to be balanced against the Order’s purpose of ensuring the continuity of, and confidence in, Police and NZDF services.

The Court held Act intended the government would monitor the justifications for vaccine mandates in light of changing circumstances. Justice Cooke was not satisfied the Order would make a material difference now the highly infectious Omicron strain was spreading rapidly through the community. While Covid-19 presented a threat to the continuity of the Police and NZDF, the threat was to both vaccinated and unvaccinated staff. The low numbers of unvaccinated staff further suggested the services could be adequately managed by internal vaccination policies. Justice Cooke also noted the possibility of future variants appearing which may further reduce the effectiveness of vaccination.

The Court remained unconvinced there was a real threat to the continuity of these essential services that the Order materially addressed. The vaccine mandate was therefore unjustified and unlawful.

The Court held the Order was unlawful and set it aside.

While this decision did not affect other vaccine mandates or policies adopted by employers, it reflects a changing attitude towards mandatory vaccination. Now that Omicron has become a reality for New Zealanders, the Crown will need to ensure its measures are justified in the changing circumstances.

The Crown has indicated they will appeal the decision.